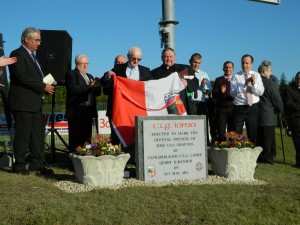 In May 2013 Emo GAA opened their new state of the art pitch. During the two year period previous to the opening we had to do a lot of work many people gave up their free time to help get the stones and roots picked, reseeded the grass, goal posts erected and goal stoppers erected. We had the fencing put up around the pitch and a scoreboard in doing this we can now hold many league and championship games for all age groups both men and women.